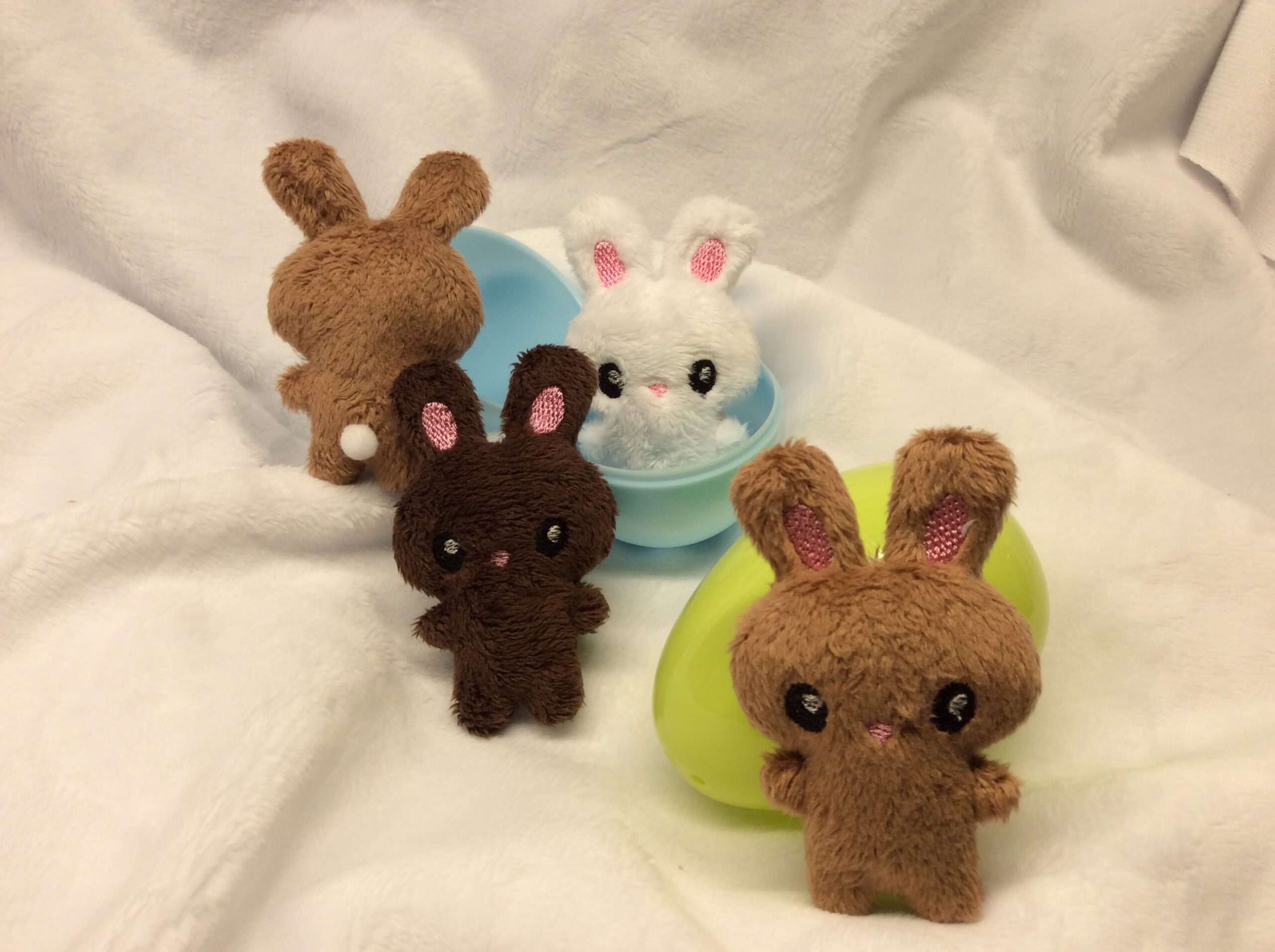 While I’m cutting out pieces for masks, I’ve had the embroidery machine doing a little bit of work. I have been thinking about leaving eggs out for folks walking with their kids, with a note on the neighborhood Facebook and Nextdoor pages.

There’s no download for these little critters, because they’re not mine. Instead, they’re Choly Knight’s Astrobunny, scaled down to a little under 3.5″ tall. Four of them fit on a 5×7 hoop, so I have a dozen to finish cutting and stuffing.

Here’s how to do it: open the pattern in Inkscape rather than your PDF viewer, to page 11. Pick out the sewing lines – not all the segments are joined, so make sure you get all the corners. There’s a little cleanup to be done to re-connect all the segments. Eliminate the segments between the ears for a turning hole (the original was turned through a slit that was then covered up by the jetpack). Scale it down, and set the Ink/Stitch parameters to a bean or 2x repeat for strength.

The faces from the original design are way too small without the framing helmet faceplate (there’s a reason bunny #1 has its back turned in the picture…). The detailed mouths also weren’t great that small, so I went with a minimalist design: round eyes and highlights and a triangle nose. I also put in a couple ovals for ear interiors.

After that, it’s the usual flat plushie method: float a piece of minky with water-soluble stabilizer. I like to put tackdown lines rather than taping sometimes, which you can see on each side of the in-progress picture. Then the facial features get embroidered, jump threads get trimmed, and stabilizer gets removed. A second piece of minky gets floated facedown, and then the outlines get sewn. Threads on the back get trimmed, stabilizer gets torn away, bunnies get cut out, and turned (a turning tool is essential for pieces this small).

Stuffing tip: the tiny pom I used for the tail is from a pack I use for dragon headknobs. Little nubs like the bunny limbs and dragon horns tend to lose their stuffing easily. I have an assortment of pom sizes and tuck those in spots like that. The ears stay unstuffed, though since they’re “chocolate” bunnies you certainly could stuff them too.

Here’s where I confess I actually haven’t closed the turning openings or sewn tails on these, because the stack of partially-finished Olson masks has been staring at me. One of the fun parts of ADHD is that it’s super-hard to motivate myself to work on things that carry a lot of emotional baggage and, while I’ve been doing my darnedest to minimize wallowing in Current Events, the baggage is still accumulating. So blog posting may be even more irregular than usual, in part because I don’t want to contribute to anybody else’s baggage. Craft blogging has enough pictures of masks, I won’t contribute too many of mine.