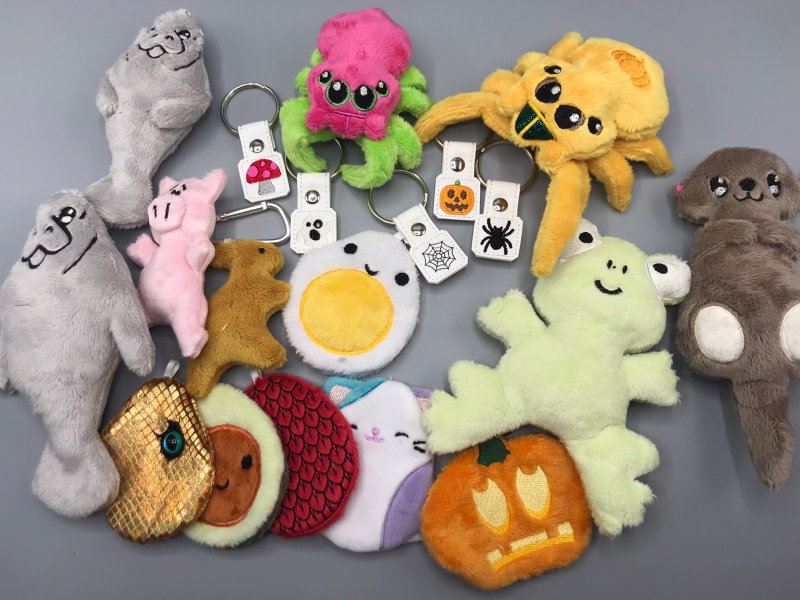 It’s a dilemma: I really really love making the embroidery machine do impossible things, but I guess if I’m trying to sell designs I should maybe not be flying quite so close to the sun all the time.

Which is fine, really: I have a lot of ideas for flat(tish) designs too. The sea otter has been one of my most popular freebies, and I had a request for a manatee to join it. The jumping spider has also been popular despite being a little more complicated hand-sewing-wise (but not bad, I promise). I also ran across the Kunin felt designs that the frog and pig were inspired by; I had forgotten about the one that isn’t a bear or bunny and have forgotten what it is again other than it was much cuter than I had remembered. Those had an open(ish) license so I might make an ITH version if there’s interest.

The eggs are the latest thing; the red one will be the early-access freebie over on Ko-Fi next week, when the Kawaii Sunflower drops here on the blog. And yes, the sunflower is the most advanced of the toadstool-format critters so far, having both a 3D stem and an applique. Creeping featuritis has clearly followed my from my IT career. The egg is much simpler.

And yeah, the little Halloween emoji tabs were in the lightbox, so they ended up in the picture. Clearly I should do a ghost plushie as well, so I have all those emoji covered. Well, except the web: jumping spiders jump on prey, they don’t spin webs. Maybe I should add a golden orb-weaver version of the spider to my to-do list…