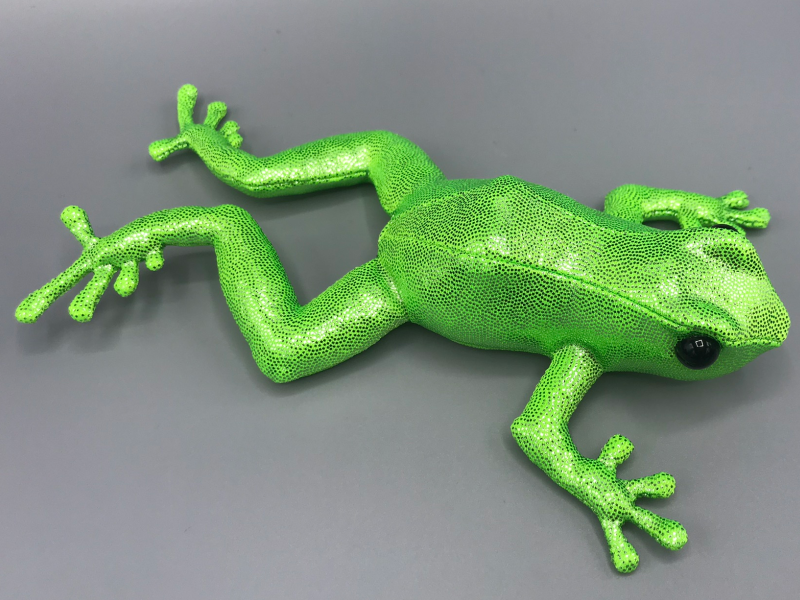 I make a habit of looking at the new holographic and iridescent fabrics on the JoAnn website every now and then, since we’re somehow still back to “don’t spend too much time indoors with strangers” status. And a very interesting fabric came up.

Yep, it’s time for Halloween/fall fabrics to be showing up in fabric stores, so of course I had to buy some. But I also had the in-the-hoop dragon design loaded up on the embroidery machine, so I cut a few squares and tested it out. Now, it turns out they’re not kidding when they say holographic foil, and under most lighting the stuff doesn’t look like blood at all. In fact, someone on the fediverse pinned down exactly what I was trying to place: it looks like a poison-dart frog.

Twenty-four hours later, I had an in-the-hoop poison dart frog. Despite the fact that it’s gusseted (like the Orca, but four pieces instead of three), it’s surprisingly easy to stitch accurately. The challenge is in turning all those toes, and then it’s just a matter of stuffing it correctly.

Now I just need to write up the tutorial which, let’s admit it, is the real challenge. (Oh, and actually make a frog out of the red-splatter instead of the cheaper test fabric.)