My Shopify (Lite) experience so far 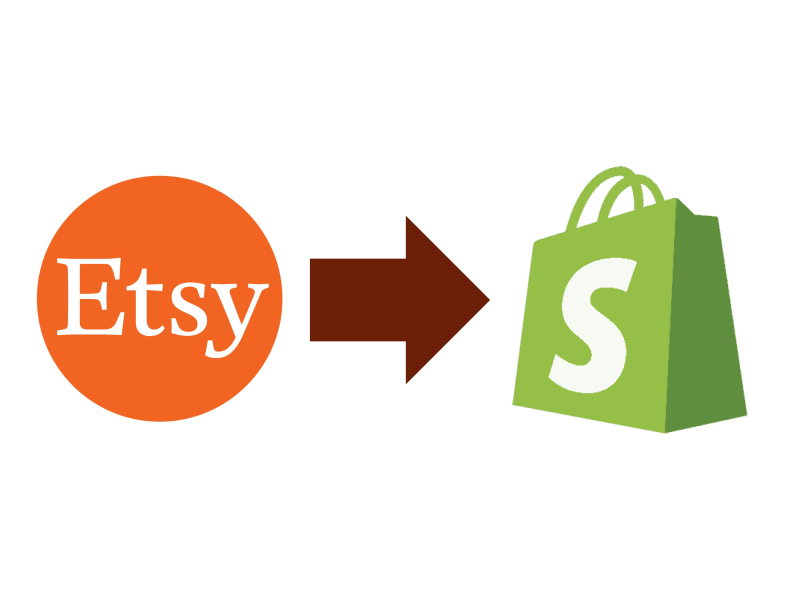 It’s not easy to leave Etsy, and I don’t plan to do so completely anytime soon. But there’s still a good reason to have a non-Etsy shop, and I’ve been pretty happy with Shopify so far.

Shopify pricing works slightly differently than Etsy in that it’s a flat monthly rate. If you want them to host your shop, the rate is $30/month and up (with a little discount if you pay annually). They’re pretty quiet about it, but there’s a $9/month plan and it’s pretty good. You also have your payment fees, but there’s nothing else.

Now, to be clear: that’s because there isn’t a marketplace. You’re entirely on your own for promotion, you lose out on all the people who are just coming to Etsy to browse, and you have to make it clear you use Shopify if you want people to know you’re not just a scam site phishing for credit card info. The behind-the-scenes services are also somewhat leaner: you’re in charge of collecting and paying sales tax to each and every state on your own, so that’s fun, and international shipments don’t have the intermediary service Etsy offers.

But if you’ve already built an audience, and you want more control over your own advertising, it’s pretty easy to switch over, or to run two parallel shops. Be careful; Etsy will shut you down if they think you’re using them to funnel sales into your off-Etsy shop. When I mention this site there, it’s only as legitimate mentions of the blog. If visitors happen to notice there’s another shop once they get here that’s fine with me and with Etsy - I also mention the Etsy shop here because I know some people are more comfortable going with a “known” site.

Shopify will import directly from Etsy, so you don’t have to go through the tedious data entry all over again. This does mean you have to deal with inventory on both sites, and the possibility that someone will be so excited about an item that they’ll buy out both sites when actually it’s the same inventory twice. Hasn’t happened to me yet, but mostly I keep things in stock only on one site or the other - which also helps with Etsy not seeing the Shopify site as “fee avoidance.”

The Lite doesn’t include any hosting, which is the biggest difference. To put the listings on your site, you need to use the Buy Button builder. If you’re running WordPress and can install plugins, there are shortcodes that will do that for you - follow your plugin’s directions. Otherwise you have to copy-paste the code into HTML somewhere, so I trust you know how to do that. In either case, Shopify gives you two options. One is single listings, the other is entire Collections. You have some choices on the listings: I usually use the smaller (“Classic”) listing. There’s some limited customization possible - colors, fonts, and the choice to have the button be add to cart, direct to checkout, or to open a popup with product details (and the further option to add it to your cart). I use the last option. It has a little builder so it creates all the HTML for you. 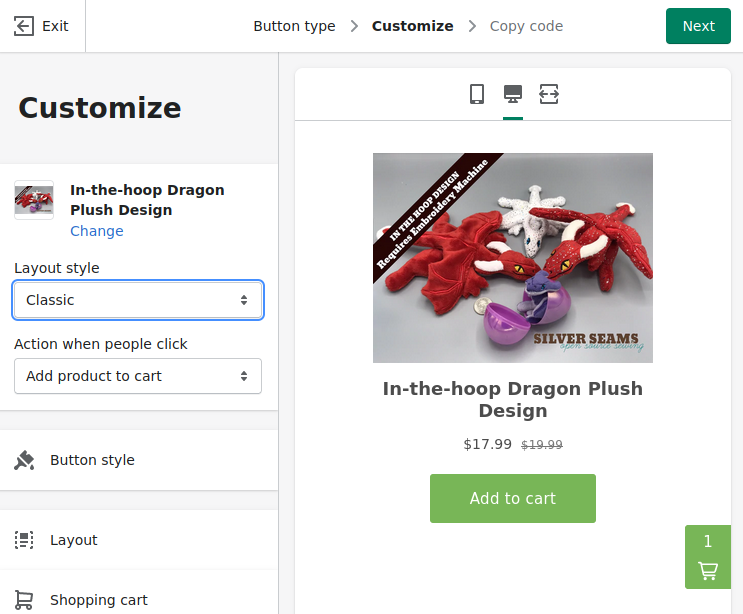 The full listing is a lot like the popup, or like a WooCommerce or old-school Etsy listing.

Lastly, if you want more control, you can have all your product details be managed by your own site, and just use Shopify for the button. Here’s a live version of the plush-dragon pattern’s button, in default colors:

Behind the scenes, Shopify lets you customize things with Apps. I haven’t delved too deeply into them, but you can even write your own. I have a few basic ones installed: 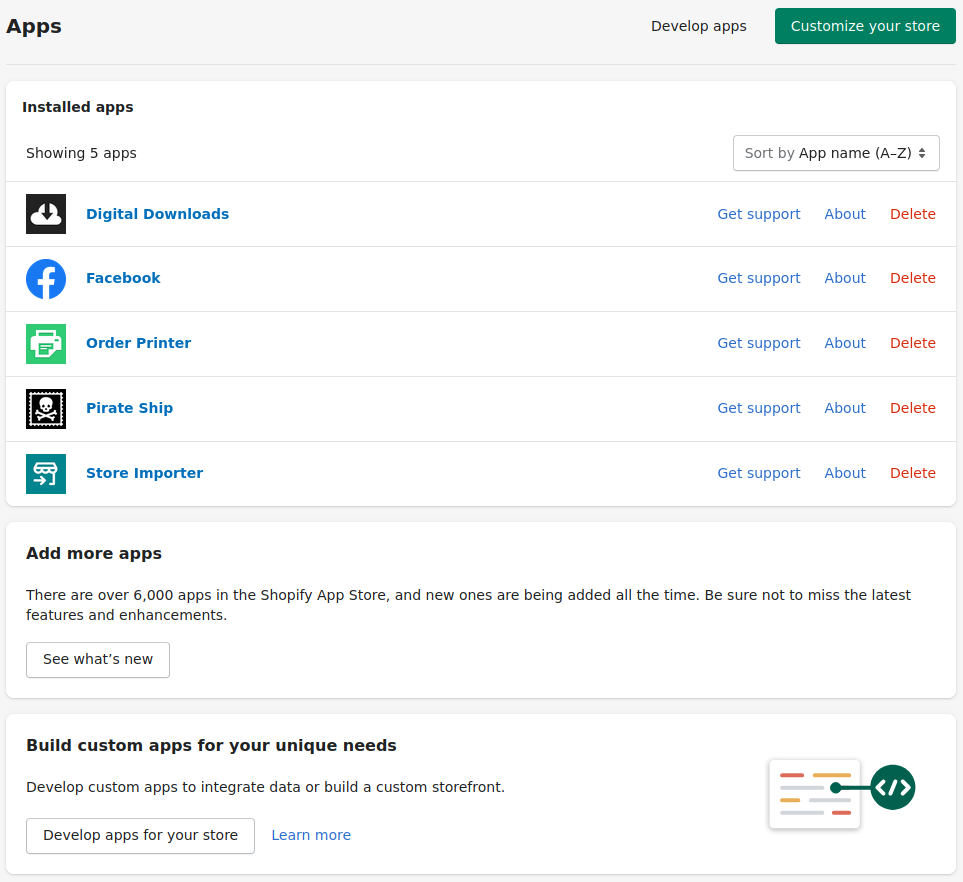 These are all Shopify’s own apps except Pirate Ship, which is Pirate Ship’s. I assume Shopify vets their apps before putting them in the list, but do your homework before installing a third-party’s. They’ll all tell you what they can read and write. For instance, the Store Importer can edit pretty much anything, since you can use it to bring in products, customers, and so forth.

The Digital Downloads one is actually what pushed me to really get into Shopify: when I realized Etsy not only does not notify previous buyers that you’ve updated your downloadable, but refuses to give them access to any additional files. Their explanation is that they don’t want to let you overwrite their future downloads and thereby take away something the buyer paid for, but that makes no sense when you have added files.

I have a few complaints about Shopify, but nothing too serious. The ability to discount an entire Collection is apparently useless: the discount doesn’t show until checkout. Why would I want a secret discount that doesn’t kick in until someone has decided to buy at a higher price? Maybe I’m missing something, but I need to disable that and turn it into a comparison price (manually editing each one).

The Facebook integration is unclear, though that’s probably Facebook’s fault (does anyone understand Facebook?) I get regular messages that products haven’t imported, and both Facebook and Shopify tell me I should check with the other for why. Since I haven’t figured out how to open the shop on the Facebook end, I haven’t worried about it too much, and will probably remove this altogether.

There’s a lot more to it that I haven’t fully explored: marketing emails, balance accounts, integrated ad buys, stuff like that. But at least this should give you an idea of what it takes to set up Lite versus fully hosted.