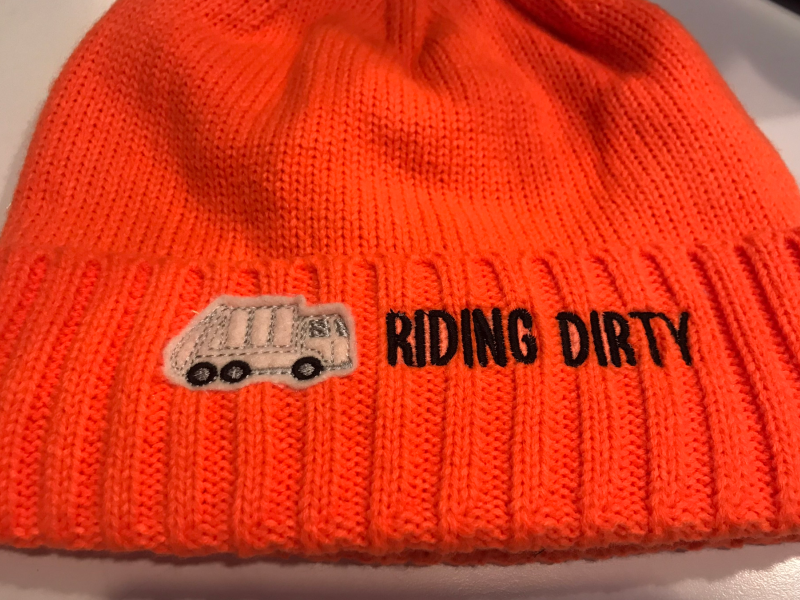 There sure are a lot of different names for those things.

Anyway, I kept seeing people making them and picked up a few here and there for impromptu Christmas presents. To be clear: I’m the opposite of an expert on embroidering on clothing, since I got the embroidery machines for basically everything but that. But when it’s gift-giving time, I’ve got the things so I put them to use. So I’m just recording for posterity (if I’m honest: for my own future reference) how I did it based on what other folks were doing.

It’s pretty basic. You roll the brim down, which puts it on the inside of the hat, and you embroider something with its top toward the edge. The only hard part is if you forget you need to embroider on the inside, or forget you need to embroider upside down, or forget which is the front of the hat. Luckily, I only did the last of these, and I just unpicked the label from inside the hat because it was otherwise symmetrical.

I almost never use cut-away stabilizer but I adhered to the “if you wear it, don’t tear it” rule and got some out for this. I also used water-soluble topper, all basted together into a sandwich. It’s a little bit of a challenge to evenly stretch the brim just slightly and keep it all square during the basting stitch - pinning it would probably have been a good idea. I don’t even know where my pin box is now that I’ve joined Team Wonderclips, but some things just can’t be clipped. 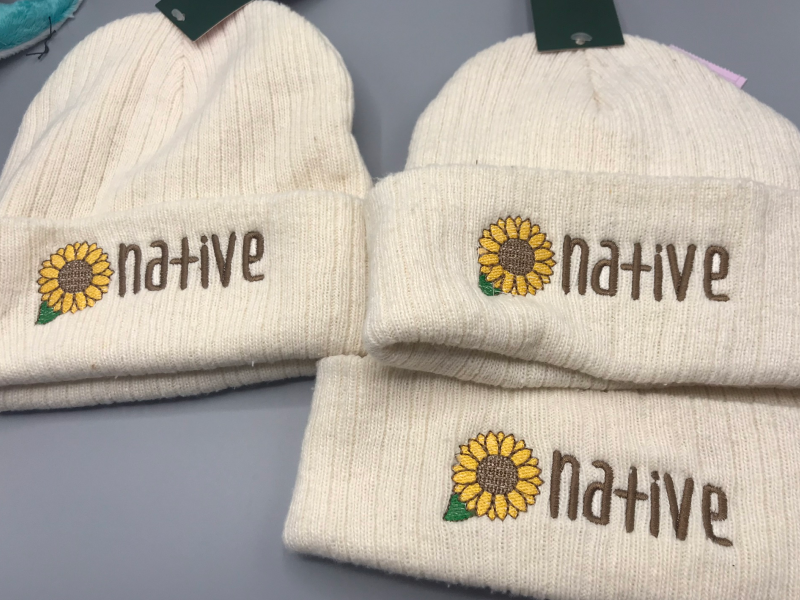 You also need to come down from the edge of the hat an appropriate amount, which I kept goofing up on because I was eyeballing and kept forgetting just how small my embroidery was. Luckily I had gotten three of these, so my kid will get the first one and the twin nieces will get ones that aren’t weirdly different in embroidery positioning. (Also luckily they’re all Kansas natives.)

Some parts I haven’t done enough to have opinions on: There’s probably some important choices to be made in designs; anything too fine is going to get lost in a chunky knit. Any too-solid designs are going to impede the stretch of the cap brim. (I waffled on cutting the stabilizer between letters, and if it was a longer-around-the-brim design would at least cut between words.)

The ones for my trash guys are a feltie from Designs by Little Bee plus Bluenesia text. The sunflower is also a DLB design, snipped from a lip balm holder, because I literally forgot the sunflower emoji existed even though it’s my favorite of all the embroidered emoji.

If you compare the two designs, you can see that Bluenesia has a slightly different feel in mixed-case than in all-caps.