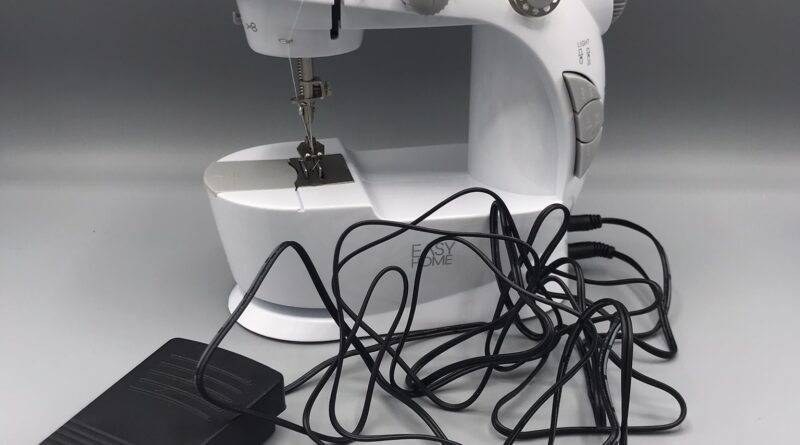 Someone on the fediverse was asking about basic sewing machine recommendations, and the tiny Aldi sewing machine came up. I wasn’t planning to get one – I have *counts on fingers* five sewing machines, a serger, and two embroidery machines.

(Wait a minute, I have five sewing machines? I need to purge some, that’s verging on being A Collection.)

But my store had an entire stack of them, so one fell into my cart, whoops. They’re $15! It was worth it just to satisfy my curiosity. So here’s the deal.

It comes pre-loaded with thread and a test swatch. I’ve seen people online be concerned that they got a returned machine and no, mine was sealed. Apparently they get their tension manually adjusted as part of assembly. 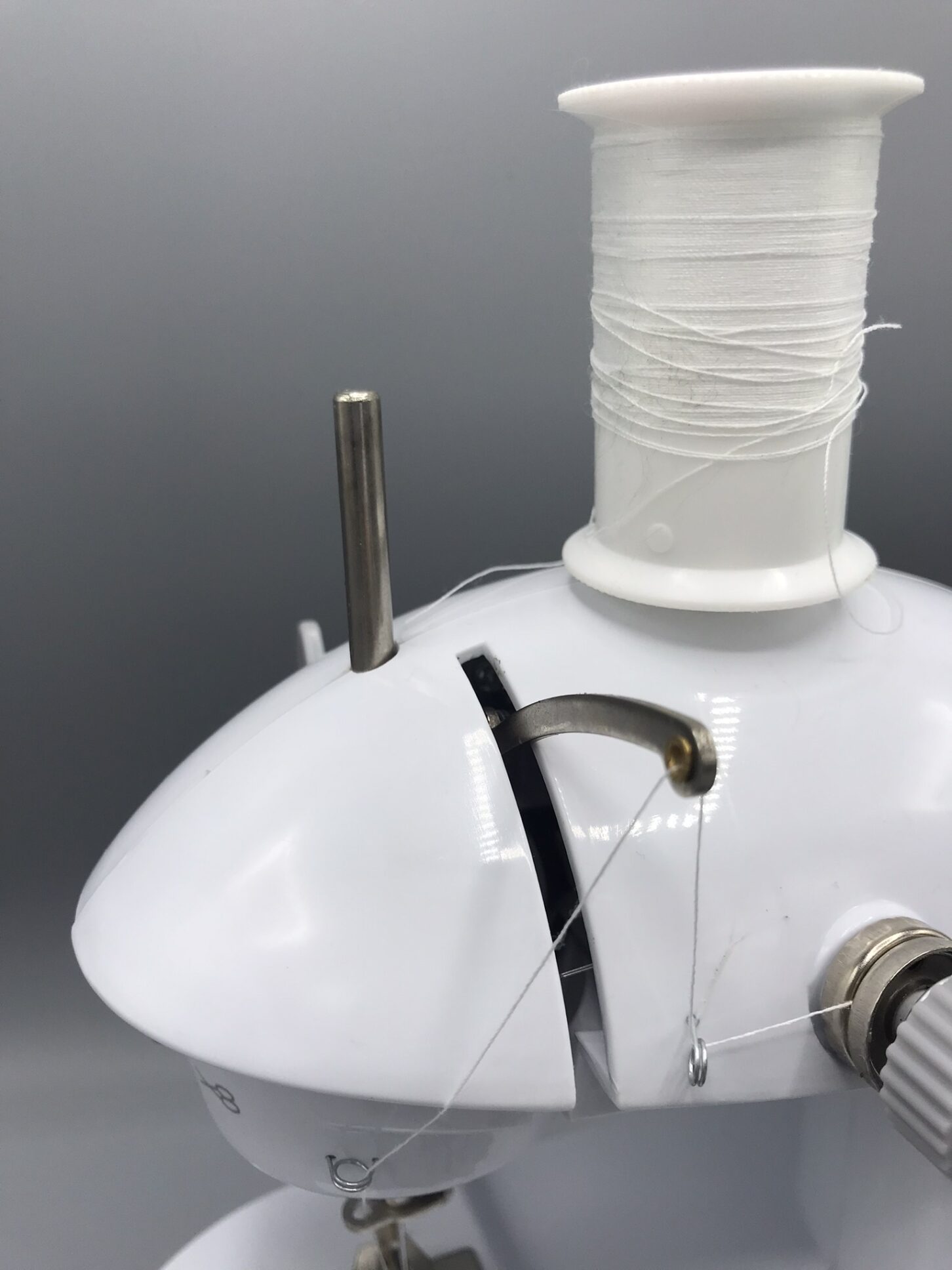 It feeds thread off a bobbin (standard Singer Type 15) or there’s a pop-up spindle on top to take conventional spools. It has two white bobbins on the machine, and comes with another white, red, blue, and black. Not high-quality thread, but it’ll get you started. I didn’t test its bobbin-winding function, but it has one. 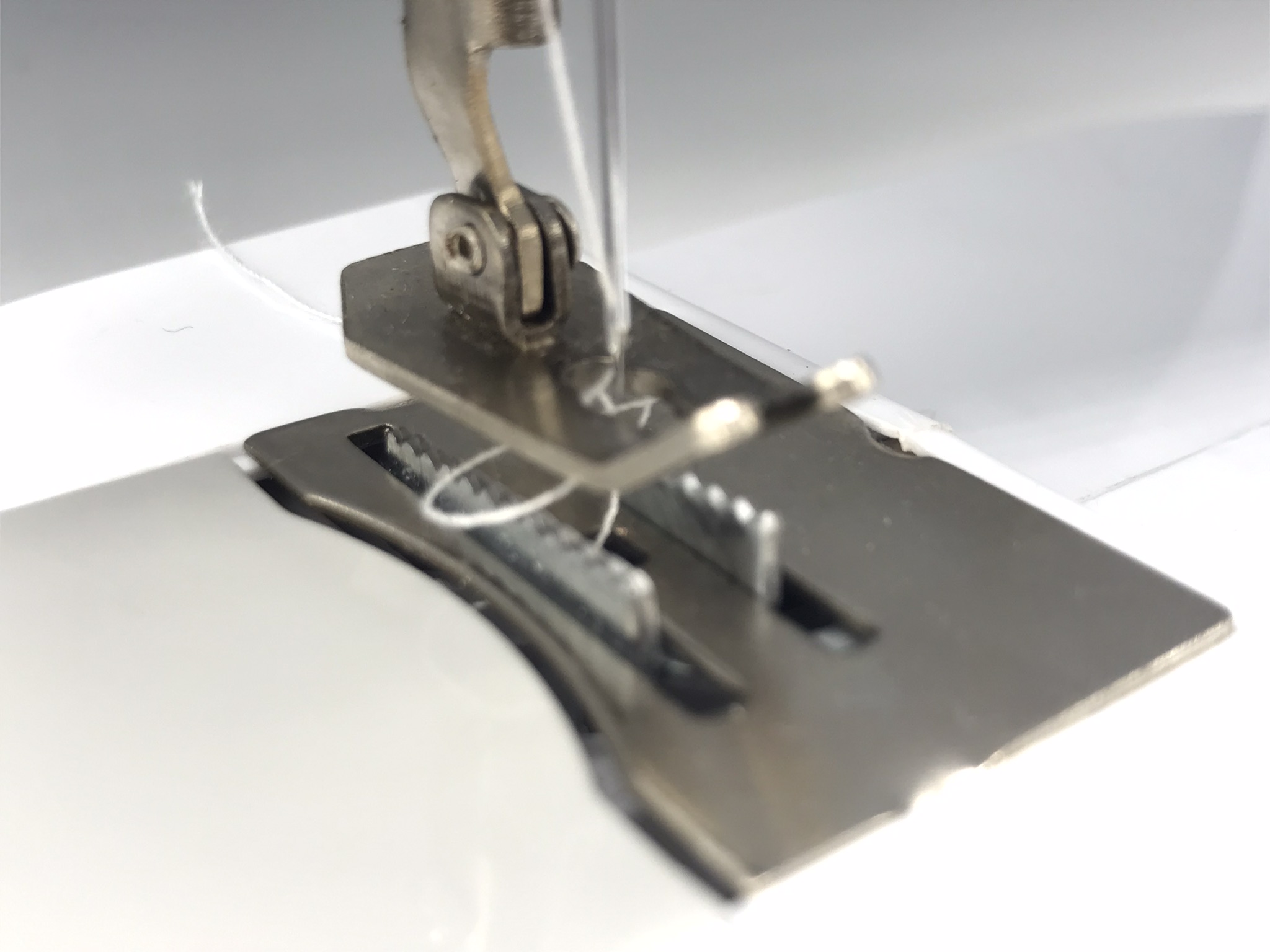 There are no convenience features on it: thread guides are all wire rings or holes in metal bars, so you’re threading everything the hard way. The needle gets threaded left-to-right like an old-school Singer (it comes with one of those little foil-and-wire needle threaders). My phone did not like to focus that close, but you can kind of tell the alignment on the throat plate is a little wonky. 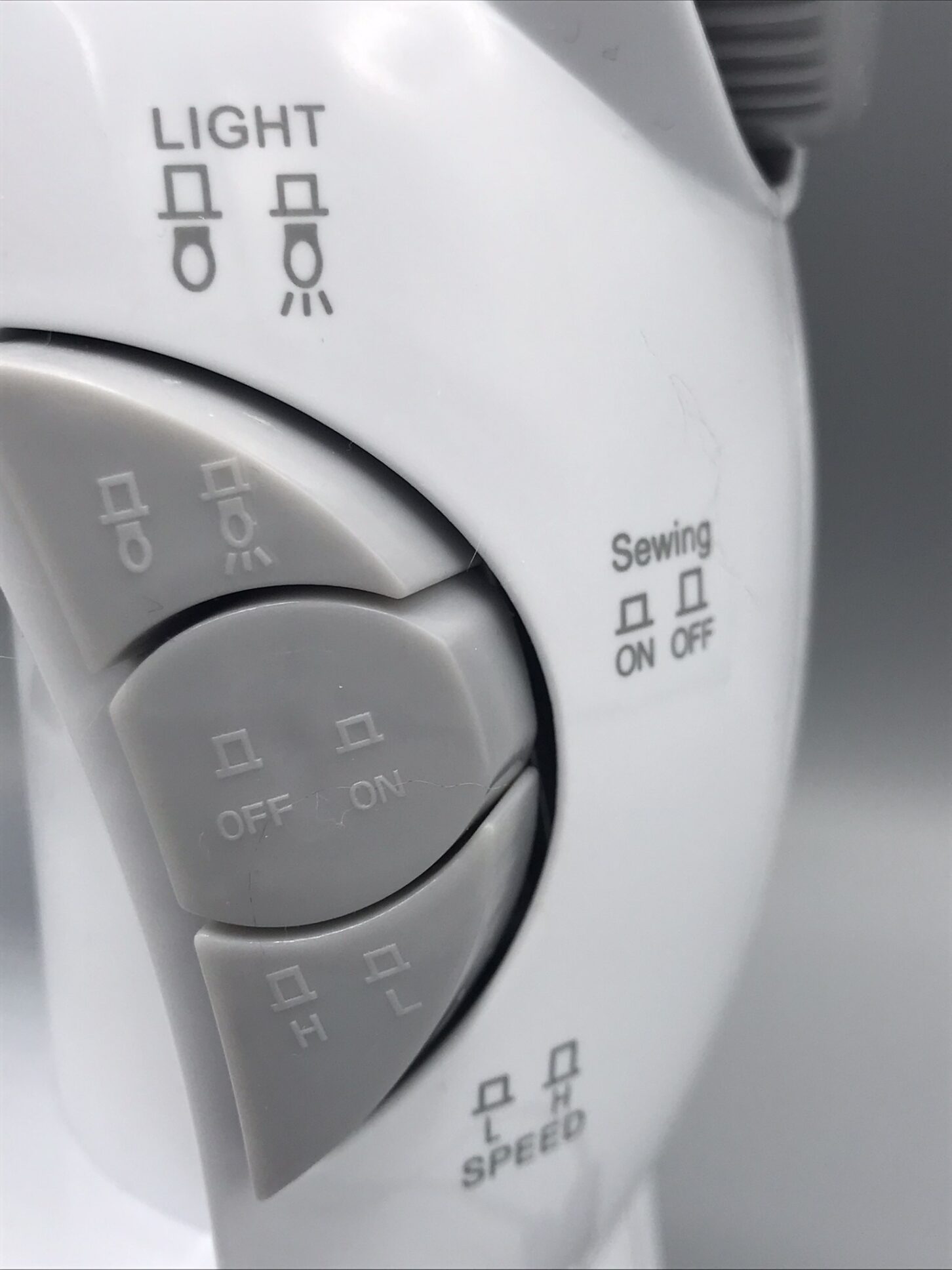 It’s got three switches. One turns on the comically weak work light, one switches from high speed to low, and the one in the middle turns the machine on. And by “on” that means: it runs. There’s no speed control aside from high/low: the pedal is another on/off switch, and they’re OR switched. Either the pedal OR the front button will run the motor. And you will know the motor is running – it’s loud, and harsh. It could probably stand to be oiled in there somewhere, since it’s pretty loud even when just being turned by the handwheel. 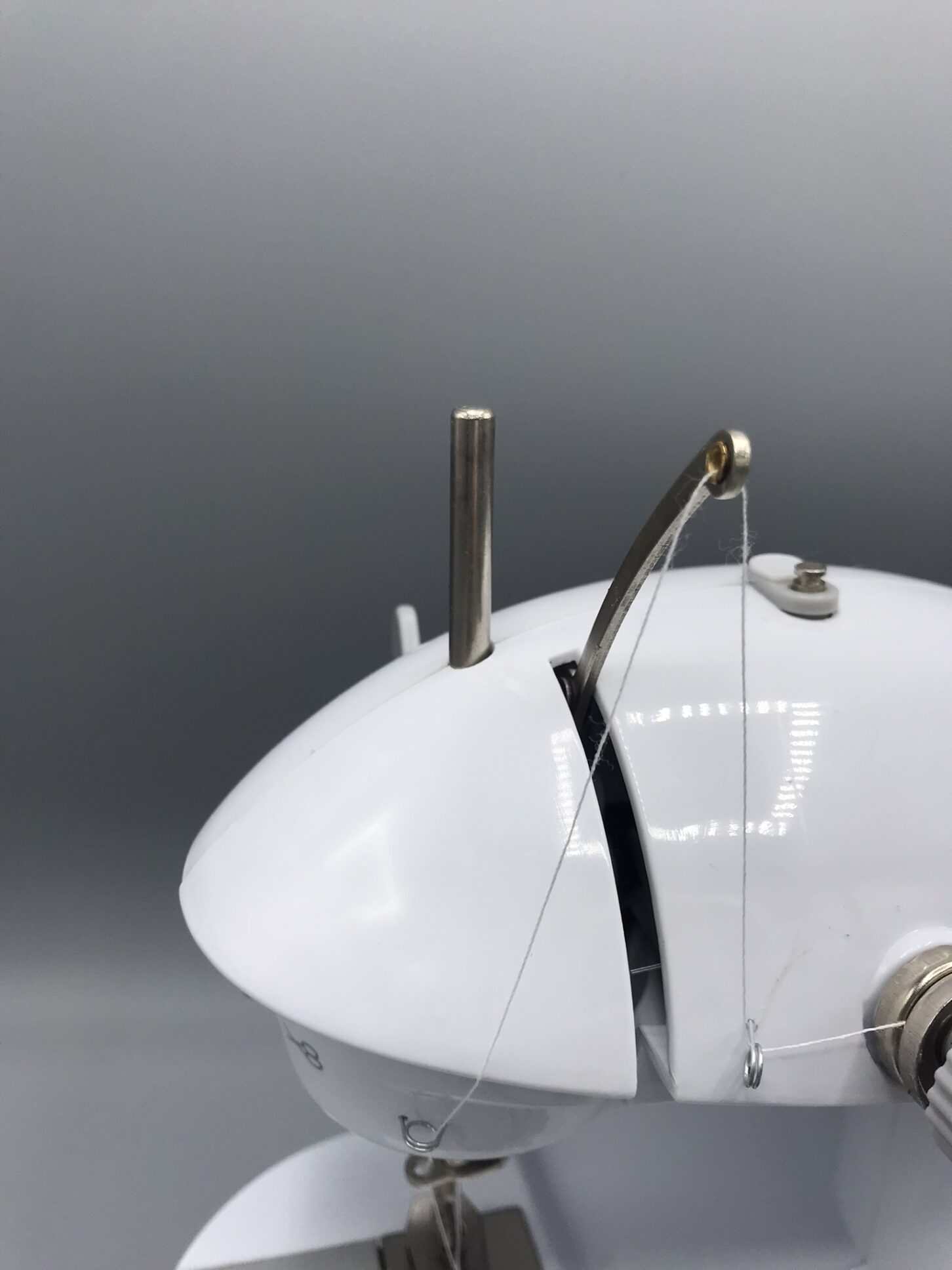 Despite the size, the needle bar and take-up lever need to have a full range of motion, so they stick out of the machine more than they would on a machine with a larger body. You can store it with the take-up lever in a lower position, but watch out for it while stitching if you’re prone to leaning in and peering at the work: you’ll lose an eye.

The stitch length is fixed, about 8 stitches per inch or a little longer than 3mm. That’s a bit long for lightweight fabrics but fine for heavier stuff, and it didn’t hesitate with a couple thicknesses of upholstery velvet. It will need help feeding anything heavy, not because the feed dogs aren’t strong enough (they might be, and they’re certainly pointy enough to grip things) but because the machine is liable to be outweighed by the thing you’re sewing on it. 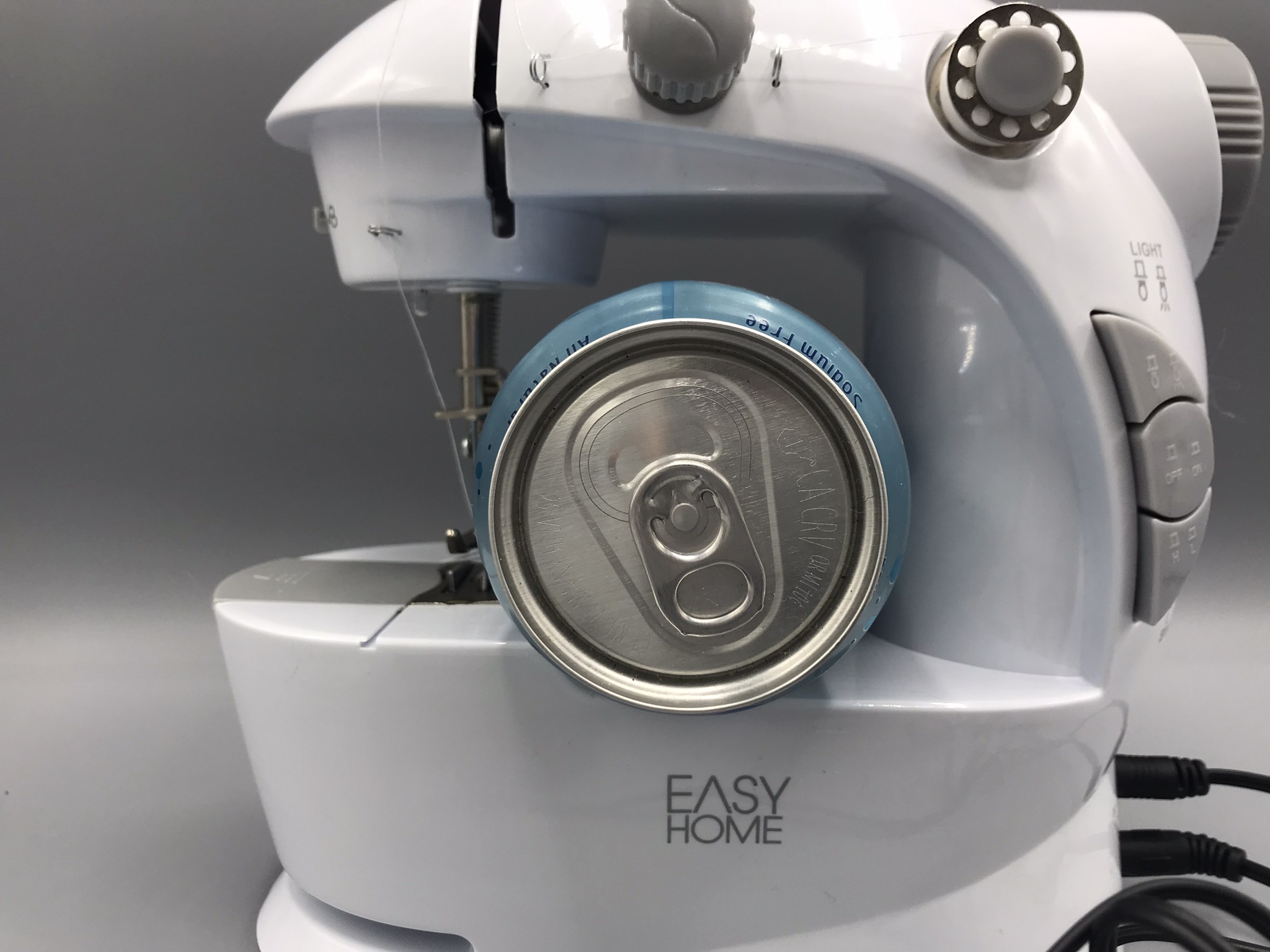 It’s also tiny, which means the throat is very constricted. You can’t top-stitch something in the middle of your work unless one side or the other rolls up to fit through a space that my seltzer-can-for-scale fills up. (Yep, that’s an old Aldi store-brand seltzer can. Not actually sponcon, there’s just one practically next door.) On the other hand, it’s technically a free-arm: there’s a little slot at the bottom so you can hem cuffs or dice bags or other small-diameter things. And if they’re too bulky to fit through the slot, there’s only another quarter-inch more of machine, just stick the whole thing inside the sleeve.

There is no reverse aside from manually turning the handwheel backwards, so lockstitches are a little inconvenient. There’s no zigzag, and no way (that I found) to drop the feed dogs for free-motion.

It comes with batteries(!), three additional needles, a manual that’s nearly as hefty as the machine, and a warranty card with a help line and everything.

I’m not sure it would be the best beginner machine, but it’s far from the worst. Its best feature is its size (well, and its price’s size), its worst is that noise, oof. 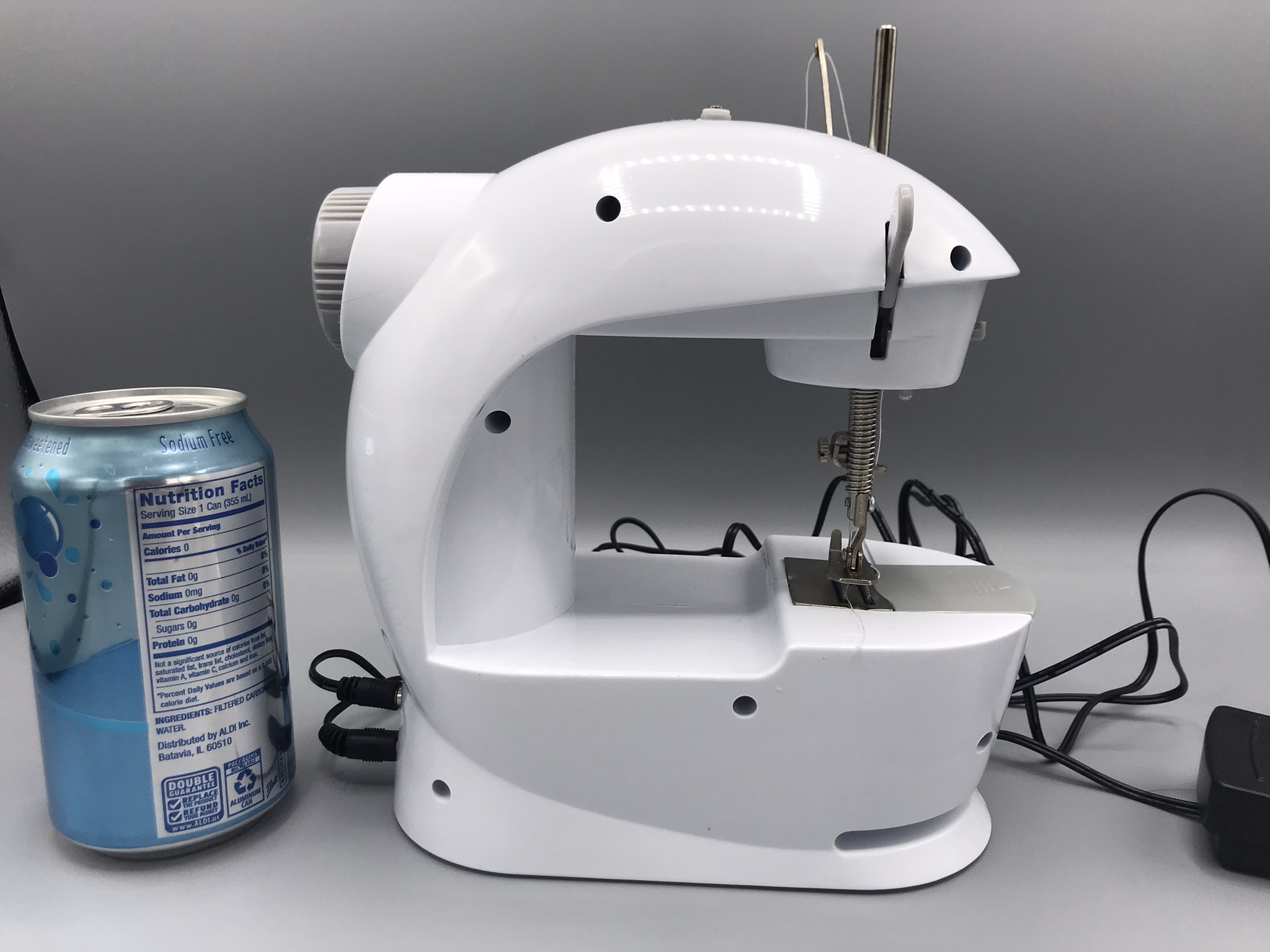