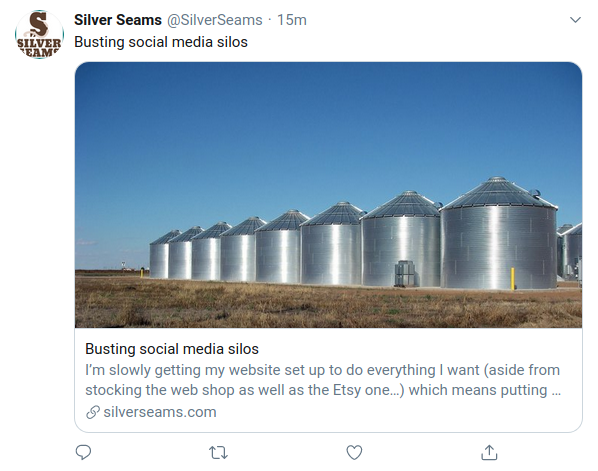 Someone wanted to know if I was on any non-FB sites since “separate blogs are hard to follow.” I directed her to my post from last year on feed readers. The problem with a feed reader is that you have to remember to open it which, if you’re only following one blog, is no easier than following it on the web. It’s just like going to Facebook and only following one person or page. It doesn’t really make sense until you follow a bunch. So here are some.

I am a grownup and if you hand me a physical newspaper I still turn to the comics page first.

I have a college kid who’s been working on cooking skills, so I like new, simple recipes.

As you might guess, I try to make everything I do have a feed.

Pinterest boards. Flickr groups. Many web forums. Individual WordPress posts (for the comments). You’d be surprised how many things have feeds sitting quietly in the background – with most feed readers, you can just put the web page in and the reader will find the feed (I’ve been a bit inconsistent about putting the feeds versus the home pages in these links, but readers don’t usually mind). If it can’t find a feed, look for the little feed logo on the page – some sites don’t follow standards, or have a page collecting all their different feeds.

Sadly, lots of sites have disabled syndication, because they want you locked in their walled garden. Twitter, Facebook, and Instagram used to have feeds, but they shut them off. TikTok, as far as I know, has never had them. If you are nerdy and poke around a bit you can find ways to roll your own feeds, but if you publish them they’ll block you.

This is far from a complete selection of the blogs I follow (I have dozens of craft blogs, fourteen local news blogs, a whole category of roleplaying game blogs I didn’t even sample here), but leave a comment anyway if you have one to recommend. Or if you’d be interested in a starter OPML file – a list of blogs that you can import into any feed reader.