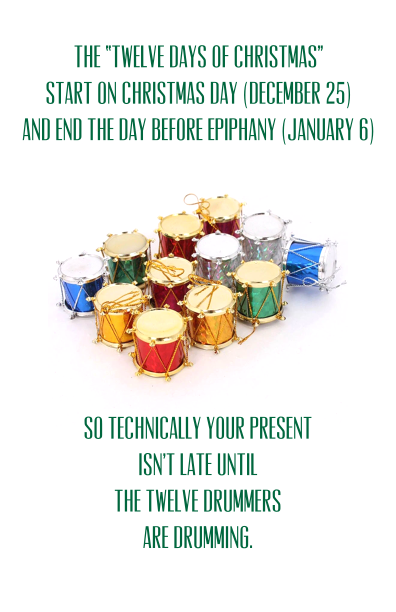 As with most Etsy sellers, I have a little dashboard that’s showing a bunch of undelivered packages. I’m better off than most – my last shipments went out on the 14th, with what I though was an extremely safe margin for First Class. I sent my gifts to my family at the same time, Priority. Sure, “two-day delivery” might turn into a week, but that’s still fine, right?

Seven packages, plus all the ones for family, are still in transit. Most of them are still showing West Berlin, NJ, meaning the Philly sort doesn’t even have room to bring them in and scan them. So I have made a few things for my customers to print out so they have something to wrap. Because even if they wanted things badly enough to buy a duplicate and have it overnighted… FedEx and UPS aren’t taking more packages, and they’re already sending overflow to USPS.

The good news is, once things get into the pipeline they seem to move at the usual speed, so there’s still a chance. The bad news is, it doesn’t seem to be first-in-first-out, so the packages that shipped the 10th(!) aren’t necessarily next in line.

So to that end, here’s a couple of printables. They’re set up to print on half of a full letter-size sheet, so you can fold it in half to make a card (with the image on the inside or the outside, whichever). Or you can just use the images from this post.

Twelve Days of Christmas
In Transit Means I Care

There’s a third, specifically for my shop, which you’re welcome to use as inspiration (or if you’re also running a small business in a tiny South Jersey town):

My buyers are also going to get a PDF with pictures and info about their specific purchase on it, so they don’t have to print out the listing or whatever.