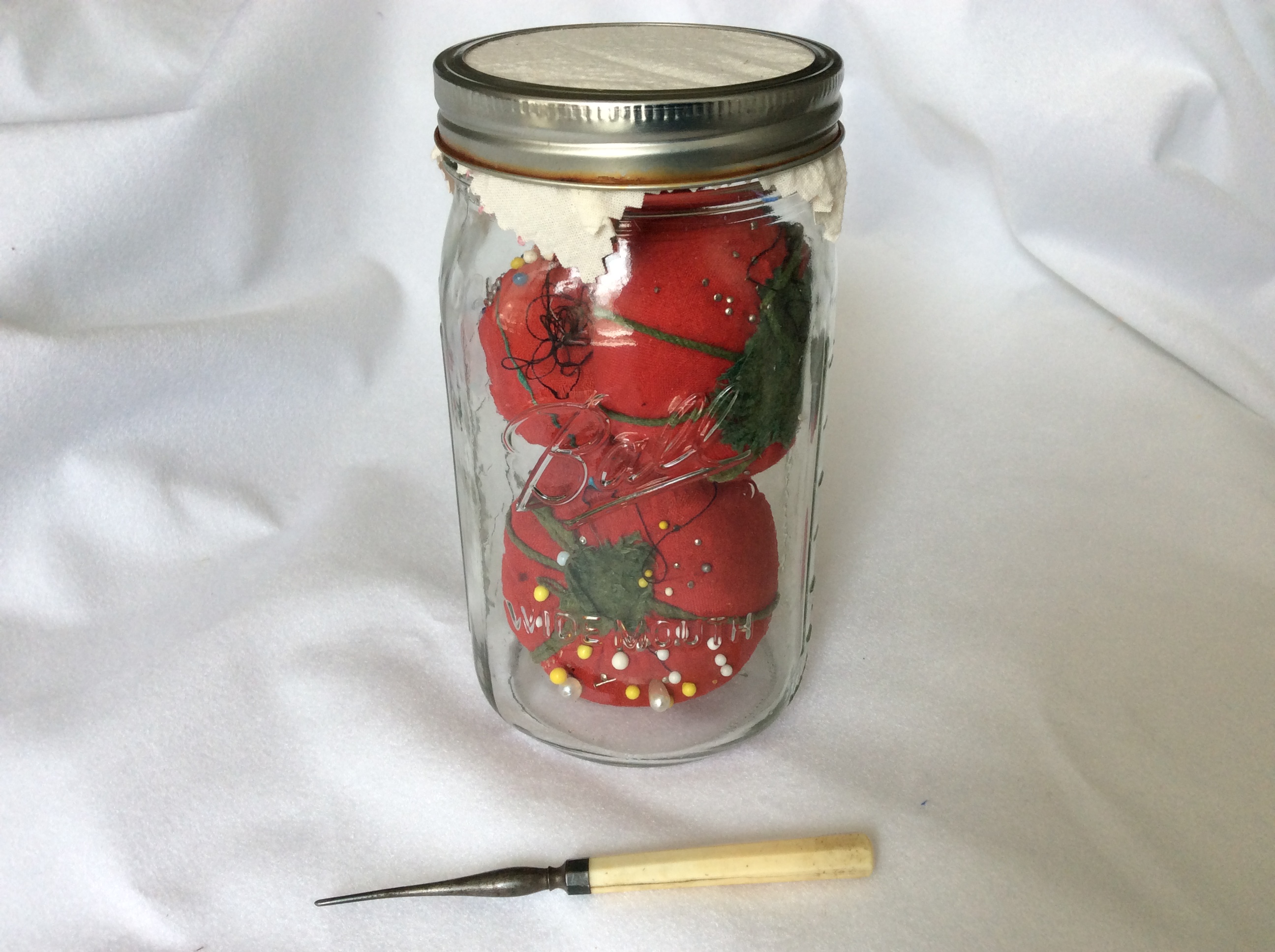 As you can perhaps tell by the last entry, I’ve been spending some times buried in notions and things. I’ve been going through some of my late mother’s sewing supplies, adding them to mine where I can. Sometimes I can tell this isn’t the first time it’s happened.

The awl is probably a grandmother’s, but I don’t know from which side of the family. The handle is natural — bone, or perhaps ivory, and the spike has a good patina. I don’t know how long it’s been since it was used; I don’t remember ever seeing it when I sewed with my mother. I bought one of its descendants many years ago, plated metal with a plastic handle. Clover still makes those, but the current generation📦 is slightly different, with a fancy grippy bit on the round-again handle. 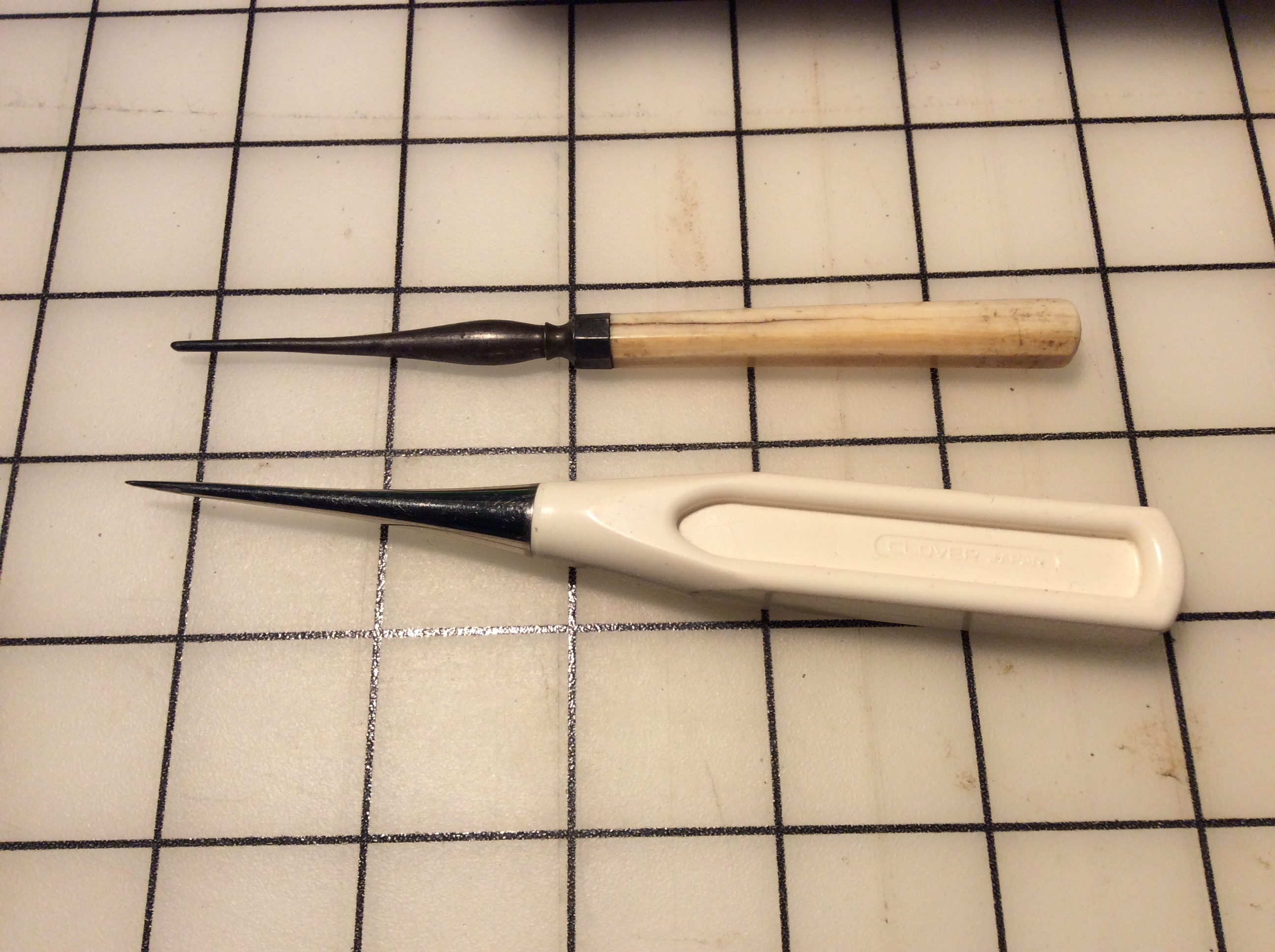 It’s a tapered tailor’s awl, which Clover says is “Designed for pulling out corners.” Certainly people use it as that, and as a sixth finger when sewing, but a straight awl will do the same. A tapered awl has two specific purposes I’m aware of: punching holes in leather, and making holes in fabric without cutting threads. I got mine to do the latter: installing teddy bear eyes and joints. Safety eyes and joints have large plastic shanks, and if you cut a hole the joint can eventually tear out. This can even be the case with traditional wire-loop eyes and cotter-pin joints, if the fabric is close enough of a weave/knit.

I don’t know if my inherited one was originally ball-point or if it’s just worn down that much, but it’s not sharp at all now. The modern one is “just sharp enough to be sharp.” It’s meant to part the fibers when it can, but to go through if it has to. Don’t use it to push out corners, though — it is meant to make holes and it will do so. (Ask me how I know…) 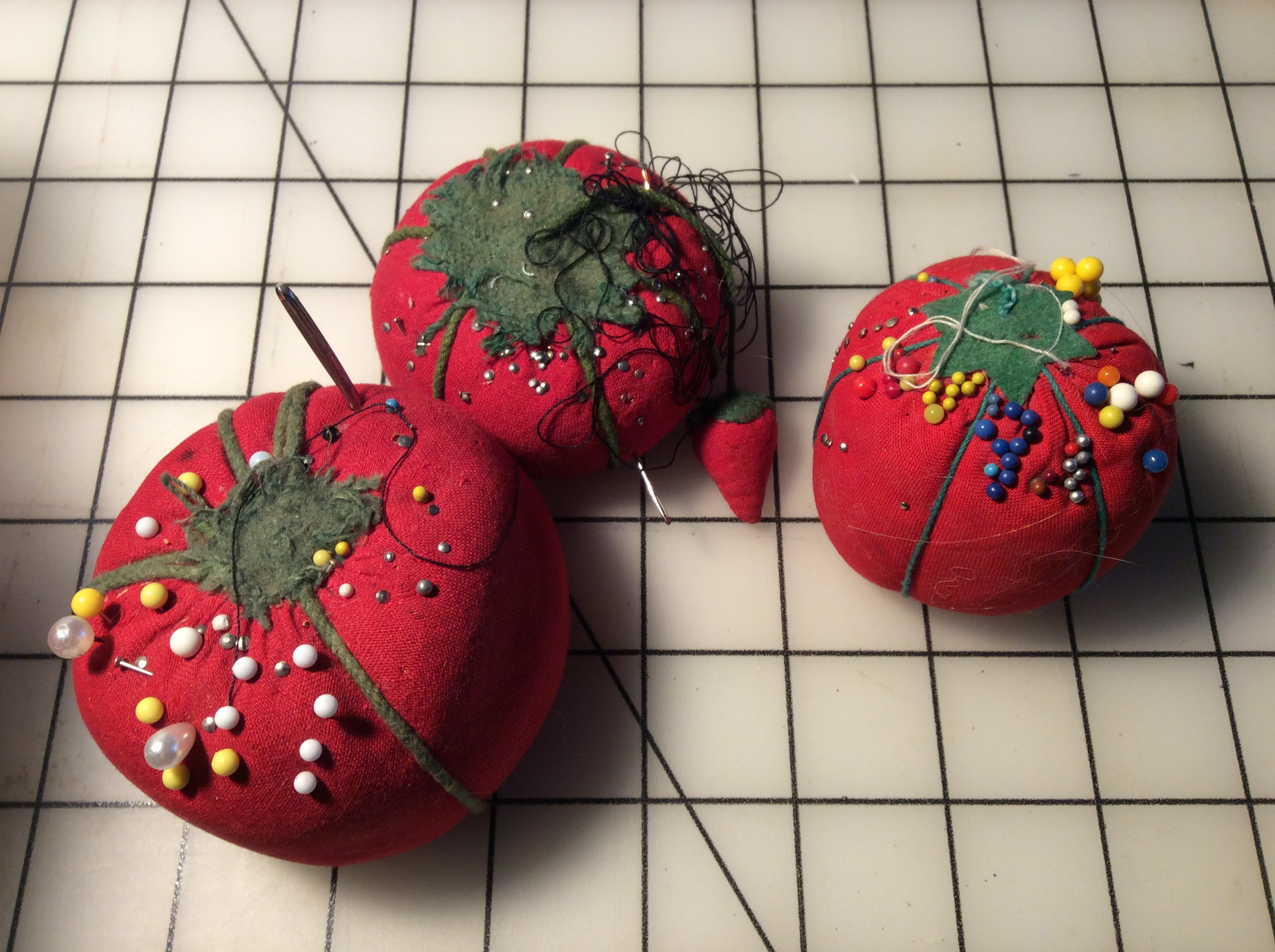 The tomato pincushions are a very universal thing. When I posted pictures of the first three on Mastodon and Instagram, a lot of the responses I got were along the lines of “My mother had one!” Those three were, if I remember correctly, my mother’s (perhaps hers before her), my paternal grandmother’s, and one from the drawers of my estate-sale treadle Singer. I sent the picture to my sister to ask when it rose to the level of a collection and she said “three,” and then later that day another box of Mom’s sewing stuff arrived from her, coincidentally containing number four (the difficult-to-see smaller one in the top of the jar). I’m pretty sure there is at least one more in the earlier boxes that I haven’t fully sorted yet.

A lot of people asked about the “strawberry” attached to the apparently-oldest one: it’s full of emery sand, used to sharpen and de-rust pins and needles in the days before rust-resistant plating. It’ll (eventually) strip the plating off, so if you have one you probably don’t need or want to use it. I still use the tomatoes themselves once in awhile, though my “canned” surplus now lives in one of the glass-fronted kitchen cabinets because that amuses me.

I do my best to use (and use up) the sewing tools and notions I’ve inherited. I’m not sure what my grandmothers would think of what sewing has become through the generations, but I like to think they’d at least approve of their things still finding uses.