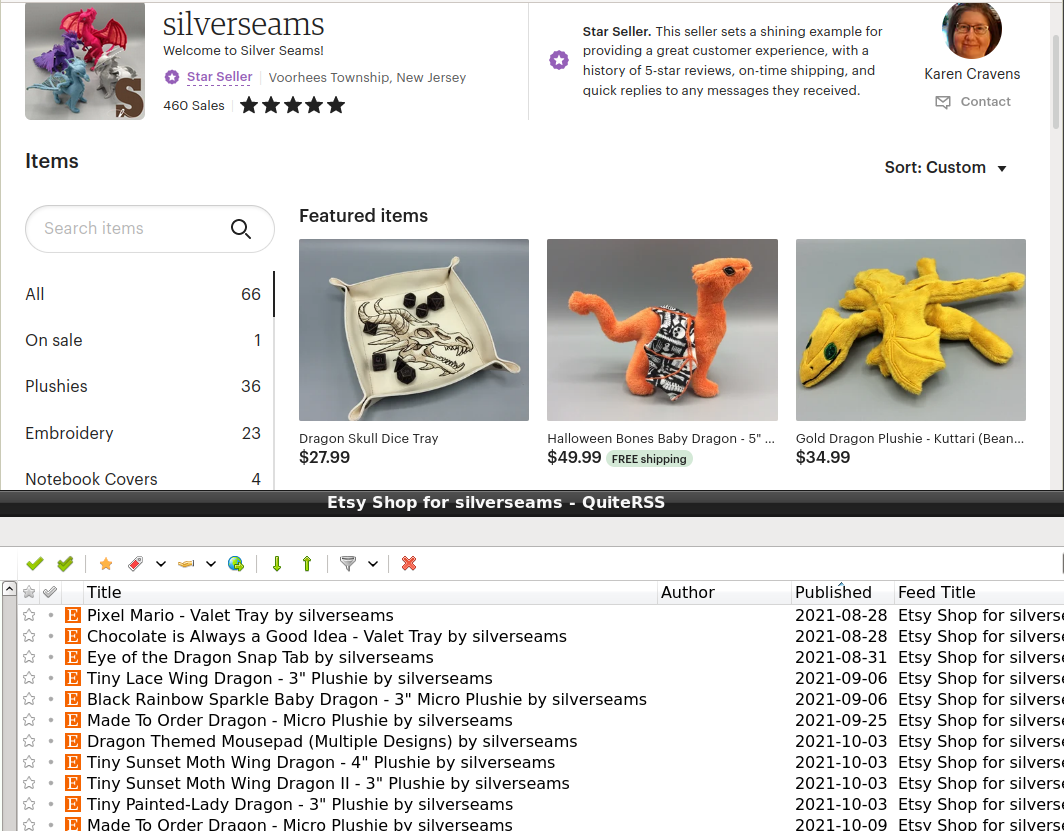 Last week I explained how to use a feed reader to get something like a Facebook timeline without Facebook. Today I’m going to go a little deeper into what it looks like when you follow a particular type of feed: an Etsy shop. Of course I’ll use mine as an example.

Etsy properly embeds the link in the HTML for shops, so you can just put the shop link into your feed reader and it’ll locate it – with QuiteRSS you just copy the link from the browser bar, open QuiteRSS, and hit the + button. It’ll pick up the link automatically and you just have to choose what category you want it in.

In the unusual case that you might need the link directly, it’s just a matter of adding /rss to the end of the shop link.

As far as I’ve noticed, only listings appear in the feed – no shop announcements or anything like that. I have to admit that because I’m constantly doing things in my own shop and thus am always on the Etsy site, I don’t subscribe to a lot of shops there. I recently subscribed to my own just so I can see how my listings look in that format, though.

Quirks in the feed

First you have to know a little behind-the-scenes of how Etsy works. There are two primary types of Etsy fees: the listing fee and the percentage of sales. The former is a flat 20 cents, and that’s what kind of makes the syndication feeds work the way they do.

When I made a listing for the tiny lace-wing dragons, I had seven different colors, with one of each. Etsy charged me twenty cents for the listing… not $1.40. They only count it as one listing… so far.

This listing is good for… uh… three or four months? Ninety days? Something like that. Anyway, when I made the listing it appeared in the syndicated feed, and anybody who subscribed to it got a notification that there was a listing. Neato!

Here’s where it gets a little weird. When a plushie sold, Etsy auto-renewed the listing: I got charged another twenty cents, and it re-appeared in the feed. You might be tempted to go “oh are there new colors?” and check the listing, but you’d be disappointed – if I added new colors or otherwise edited the entry, it wouldn’t re-appear in the feed because that wouldn’t trigger Etsy to charge me anything.

You may notice that there’s only one sale but two renewals. That’s because it has gone the length of the listing without selling anything (it happens, on the more expensive items). A sale renewal resets the clock, but if it expires I have to pay another twenty cents. And it would reappear in your feed.

There’s at least one thing that isn’t weird about the renewals/feed appearances: suppose someone orders five of those dragons at once. I get charged five renewal fees for the second through fifth renewed-and-immediately-sold dragon plus the sixth renewal for the final, still-in-stock dragon. Happily, the feed seems to only shows a single entry for the listing in that case. I suspect it only shows the most current entry, period, so if there are multiple orders for the same item in between your reader polling for updates you’ll still only get it once.

Update: Yeah, looks like de-duplication doesn’t really work 100% of the time, so if you follow someone who sells a lot of, say, digital designs, you’ll get a lot of bogus alerts. Good news: if, for example, they put their plushies in a separate category, you can subscribe to just that category. Annoyingly, Etsy’s category page still point to the overall shop RSS feed, so you have to fix that manually.

If you give that to your feed reader, it’ll only bring up the Plushies category in my Etsy shop. It’s not perfect – you can’t subscribe to the Art Doll category because I don’t have anything in it right now (Dragonheart is only in the on-site shop because I got tired of paying renewal fees on it, it’s never selling 😜).

As I mentioned, I mostly just favorite a shop on Etsy directly — but there are reasons to do it one way, the other, or both.