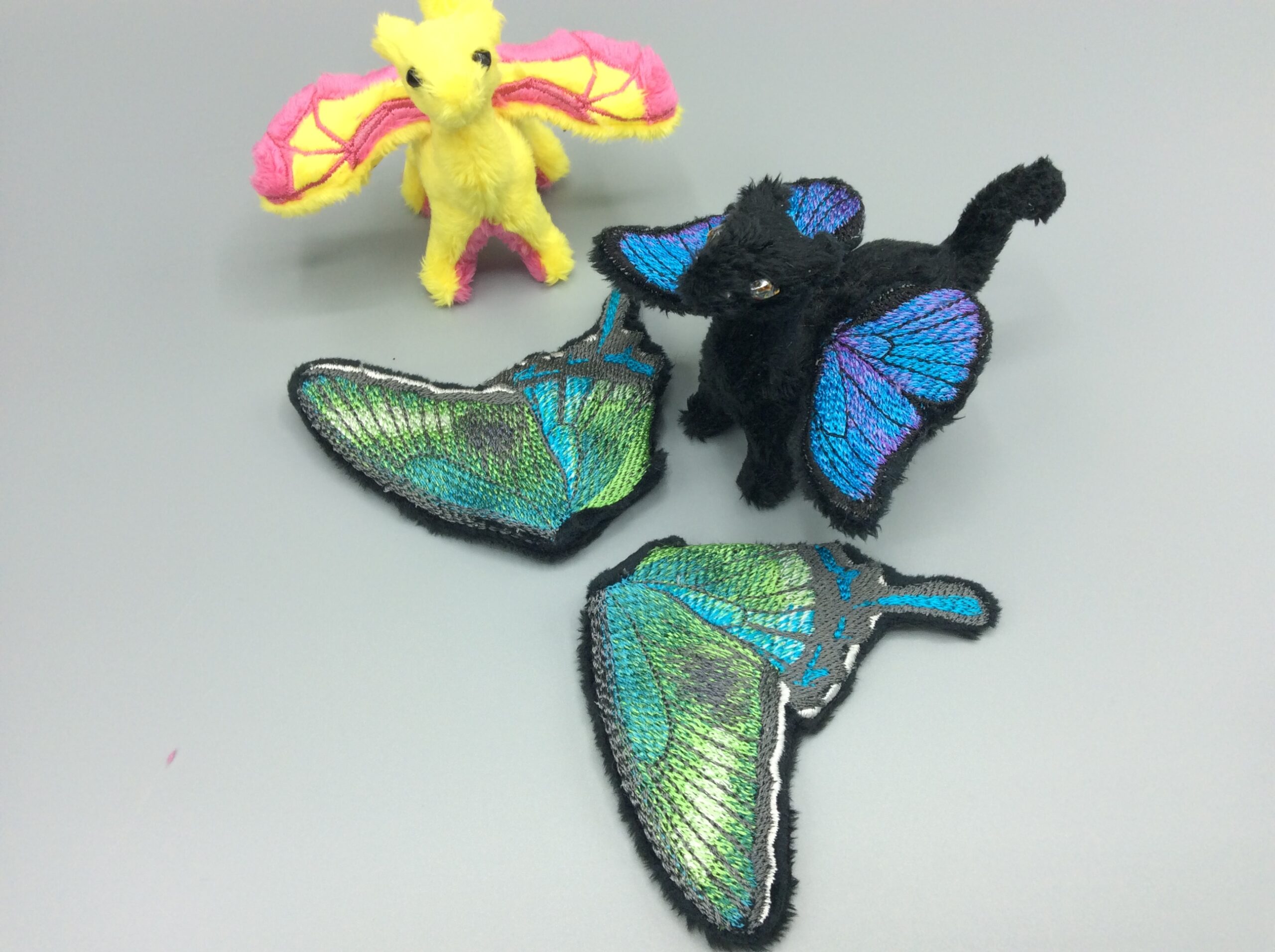 I used up all my heavy wash-away stabilizer making the lace wings for the previous shop drop, but I was still in the mood to make some fun dragon wings. The canary minky restock arrived so I could do a proper set of rosy maple moth dragons – an applique design I made awhile back but hadn’t gotten around to because, again, hung up on restocking regular stuff. I have a bunch of regular-embroidery butterfly designs and I decided to give some of them a shot. Fairy dragons it is!

I’d tried embroidering conventional designs on felt, but the backing doesn’t come out clean enough to leave exposed, and in any case that still requires wash-away base stabilizer. This time I tried embroidering them on mochi, adding a seam around the outside (same technique as creating a die line), and turning them. And it works! Mostly.

I used tear-away stabilizer, which is fairly soft, but the designs lay down a lot of thread and it was sort of like trying to turn a plushie where one side of the piece is made from, say, light tooling leather. I may have been heard wondering, “Is that popping sound stitches giving way, or just my knuckles cracking?”

The blue morpho wings are tiny. I guess I didn’t put a quarter in there for scale, but here’s one of the rosy maples.

I thought maybe the larger swallowtail would be easier, but nope. They turn themselves into origami trying to fit through the turning opening, and then you can’t figure out which part to pull on. I didn’t want to use the hemostats, even padded with a scrap, because I didn’t want to crease the stitching. Slow and steady does it.

Part of the key was breaking up the stabilizer before attempting anything – pre-rolling the wing, crumpling it up, getting as much flex in as possible. A design with a lot of satin stitching isn’t going to come through this well, so the designs I picked were all just fills of varying densities. A design that isn’t a solid, layered fill would be even better, but I was drawn to the layered, multicolored designs because of course I was.

It’s also pretty important to use a stretchy fabric for the non-embroidered side. The wings are flat, and in theory don’t need stretch to turn. In practice? The stretch really helps in the weird origami phase.

I will probably break out my treasured stash of teddy-bear felt, which is thin and has a very smooth surface – and whose manufacturer is no longer in business, because I think the next thing to try is felt again, but using the same die-line-as-seam-line technique to put a second layer of felt on the underside. No turning needed, and no wash-away stabilizer. My fingers will thank me.