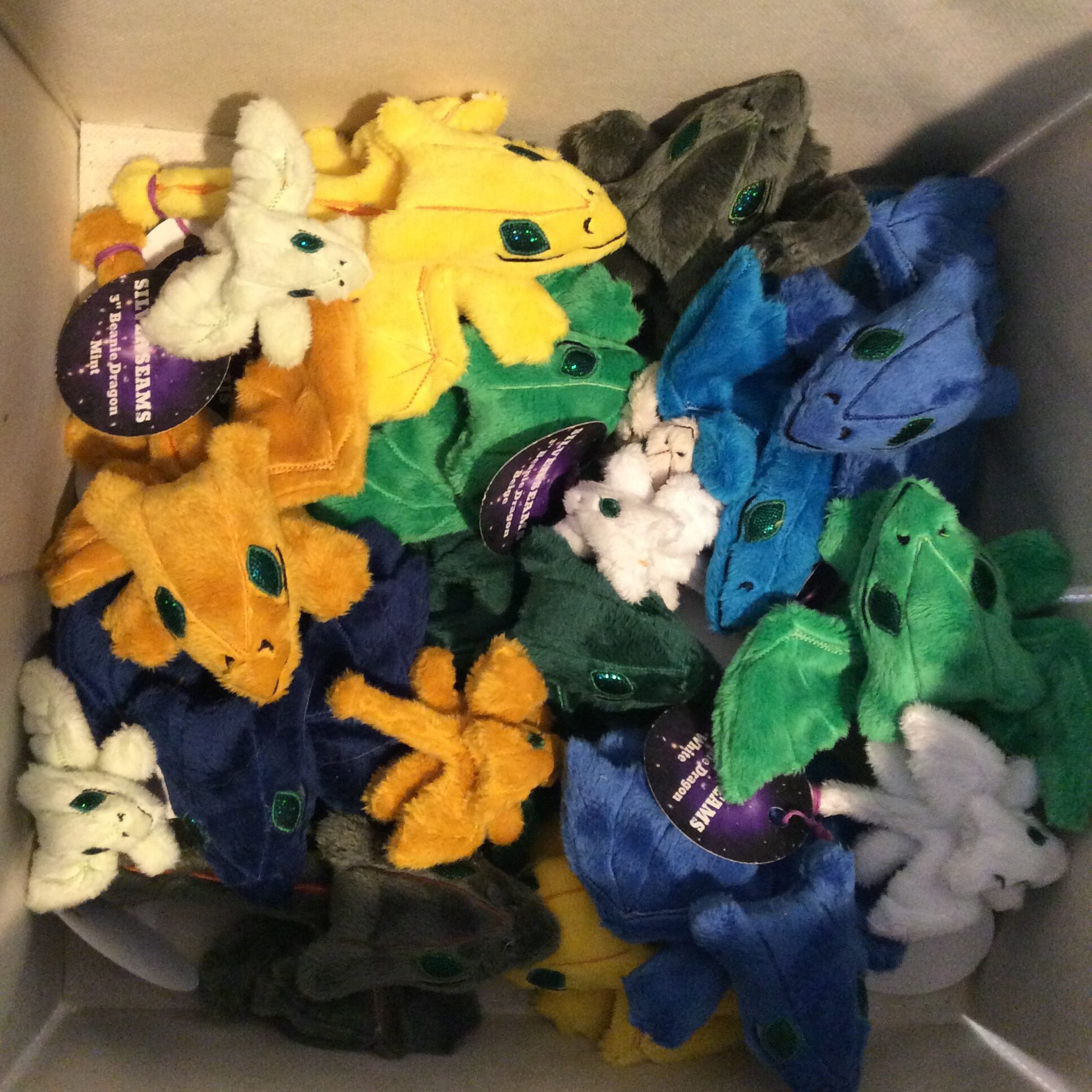 If you want to get technical, Silver Seams has been around since February of 2003 (or a little before, but that was when the domain was first registered). But in a very real sense it has its two-year anniversary last week and I didn’t really notice. The first sale was April 8, 2019, and was a six-inch gold beanie dragon. The beanies are retired and someday soon I’m going to take a little sabbatical and do nothing but get that design written up to sell, because I promised the collectors they’d be available from other people when I stopped make them and, uhhhh. Anyway, here’s how they came about.

I got the embroidery machine in November 2018. I bought a Soapy Bacon fox design to see how commercial designs worked. And of course immediately tried changing the face embroidery myself. After two semi-unsuccessful foxes, I went, “okay, I know everything about how this works.” Yeah, I’m like that.

My first attempt was already a little beyond the flat-sewn thing, because I didn’t plan to be constrained to just two dimensions. This is a four-part dragon: head, body, wings, and tail. The head is mostly flat-sewn, but has a box seam on the muzzle to give the head some depth.

But it was difficult to get the muzzle seam aligned right. The two halves of the mouth embroidery had to meet up, and so forth – piece of cake today, but I was trying to streamline it so back to two dimensions it was. And hey, the stretch of the minky tended to make it pretty three-dimensional anyway. Eight(!) spikes got reduced to five. The tail got attached to the wing piece. And we were off to the races. The first ones had embroidered eyes, basically tiny versions of Choly Knight’s dragon eyes.

But I had some gold minky from the owlbear beak so clearly it was time to make a gold dragon, and if I was going to make a gold dragon I might as well make a Pernese one. Five spikes got reduced to two headknobs. McCaffrey described the colors as “swirling” so… maybe a spiral? (Also look at me being all optimistic with the metallic threads! I was so young and naïve then.)

Next it was time to try some of the fun dancewear fabrics I had accumulated.

Aside from changing the satin stitch to match the eye instead of the minky, this is pretty much the final version of the beanie.

Egged on by some Pern fans on social media, my practice dragons started to fill out the Pernese colors. Here’s the first six I used: Shannon Cuddle 3 in gold, kelly green, and electric blue – still workhorses. JoAnn’s now-discontinued “Soft N Comfy” in white, brown, and cappuccino (for bronze).

By February 2019, I was ready to start writing the tutorial – because again, I was planning to be in the pattern-selling business. Hahaha, I’d never have the discipline to mass-produce plushies, that’s ridiculous. Here’s Ramses helping me show how to stuff a five-spike head in my first attempt at a tutorial picture. I hope I was planning to crop all those scraps out.

But by April, I’d somehow been talked into putting “just a few” finished plush up for sale. And that’s been “just a few more” for two years now. Not necessarily in Pernese colors, of course, though the headknobs have stuck around (they’re much easier to turn than pointed bits).

By request, I’ve finally gotten around to re-listing the beanies in the on-site shop: the 6″ ones are here, and the 3″ hatchlings are here. If you don’t see a color you want, ask me; I probably have it in my big bag of unfinished dragons.

Anyway, in honor of the anniversary I’ve put all the trad minky dragons (the ones that replaced the beanies) on sale in the Etsy shop for 20% off starting tomorrow – and because I’ve let so many colors go out of stock while playing with sparkly fabrics, I’ll add in a choose-your-color entry.