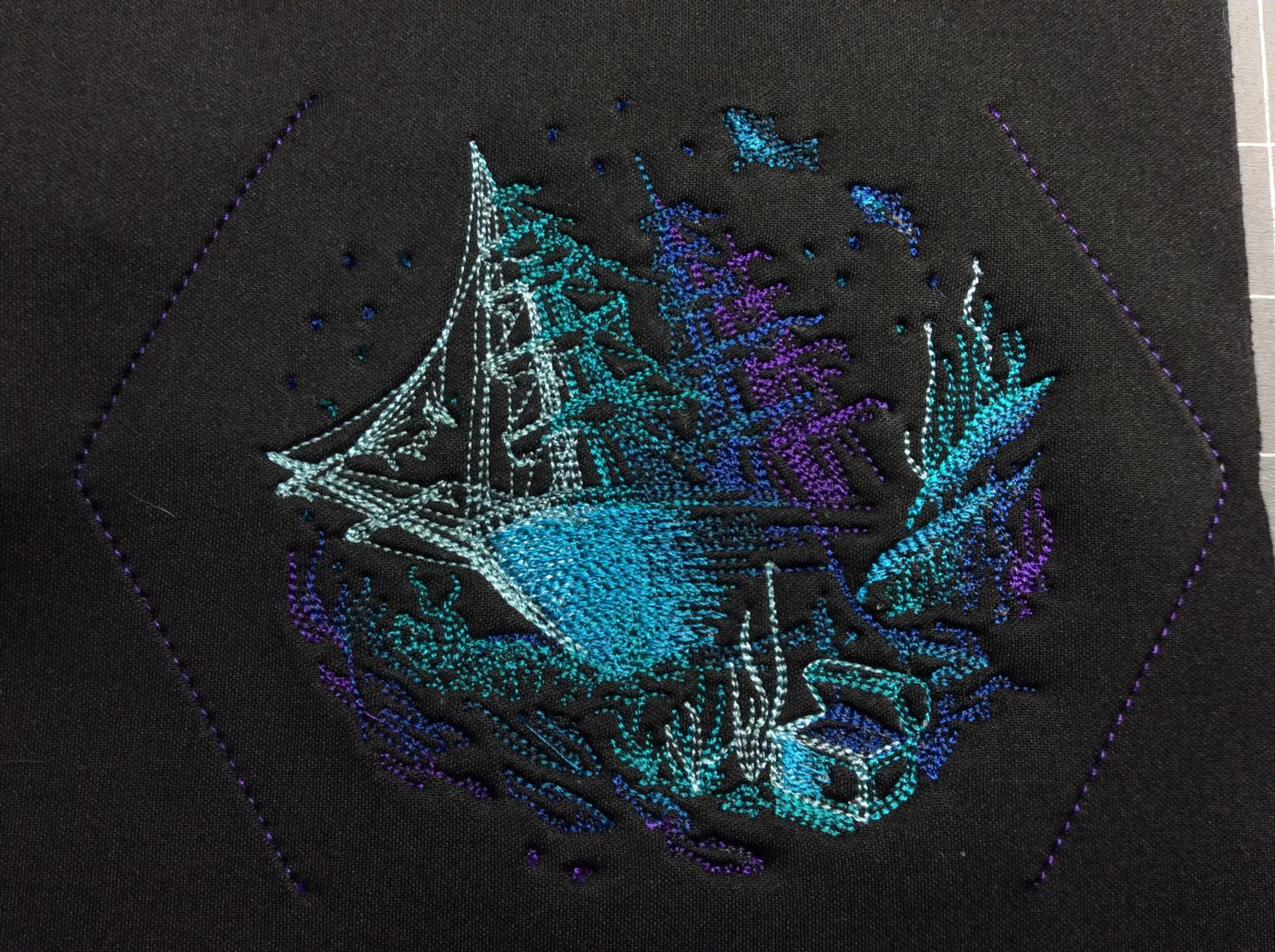 JoAnn has been getting in new fabrics frequently of late. This is a slight problem for me since I’m limiting my in-store time (and you should, too). So I bought a yard of the stretch scuba neoprene sight unseen, which is always an adventure.

Verdict: this is fun stuff. I wasn’t sure, at first.

First try was without top stabilizer. I’d like to say I approached this in a scientific manner, but let’s be up-front: I just got distracted. Scuba is a very smooth fabric, but it also drags under the foot and is very stretchy, which adds up to major bloop.

I should also clarify the terminology here: JoAnn has “stretch scuba neoprene,” which does not include the middle neoprene layer that makes it actual scuba-suit fabric – it’s listed as 93% polyester, 7% Spandex. That is to say: it is called scuba neoprene, it is neither scuba nor neoprene. This is in keeping with calling polyurethane “vinyl,” I guess. I don’t make these rules. It’s about 2mm thick, unscientifically, and as you can see by the pictures, it compresses a lot.

They also have something labeled simply “neoprene,” slightly more expensive, which they describe as being suitable for scuba gear. And which doesn’t have “scuba” in the name (again, I don’t make these rules). It’s listed as having a 100% polyester facing, 100% neoprene middle, which certainly sounds like it’s actual neoprene scuba fabric. Someday I’ll see some in person and comment more, but not today.

As you may be able to tell by the bloop picture, I stitched a tackdown on the first attempt. I left a failed piece directly hooped overnight and it has some pretty good hoop burn; we’ll see if it recovers. Briefer hoopings aren’t as bad. This is where I need a magnetic hoop, but somehow there still doesn’t exist one for the PE800 (the Embroidex one on Amazon doesn’t fit despite listing it in compatibilities).

Putting a bit of lightweight WSS on top (or having a walking/Teflon foot, probably) instantly solves the blooping, and the stuff stitched out like a dream. Because it’s so compressible, stitching still sinks into it quite a bit; I’m almost tempted to try out puffy foam on the back side to see if that compensates; some designs might need some knockdown stitches.

My first laser-cut dice tray arrives today and I’m excited to see if this works as an insert; subscribe to the product-announcement mailing list in the sidebar to find out.