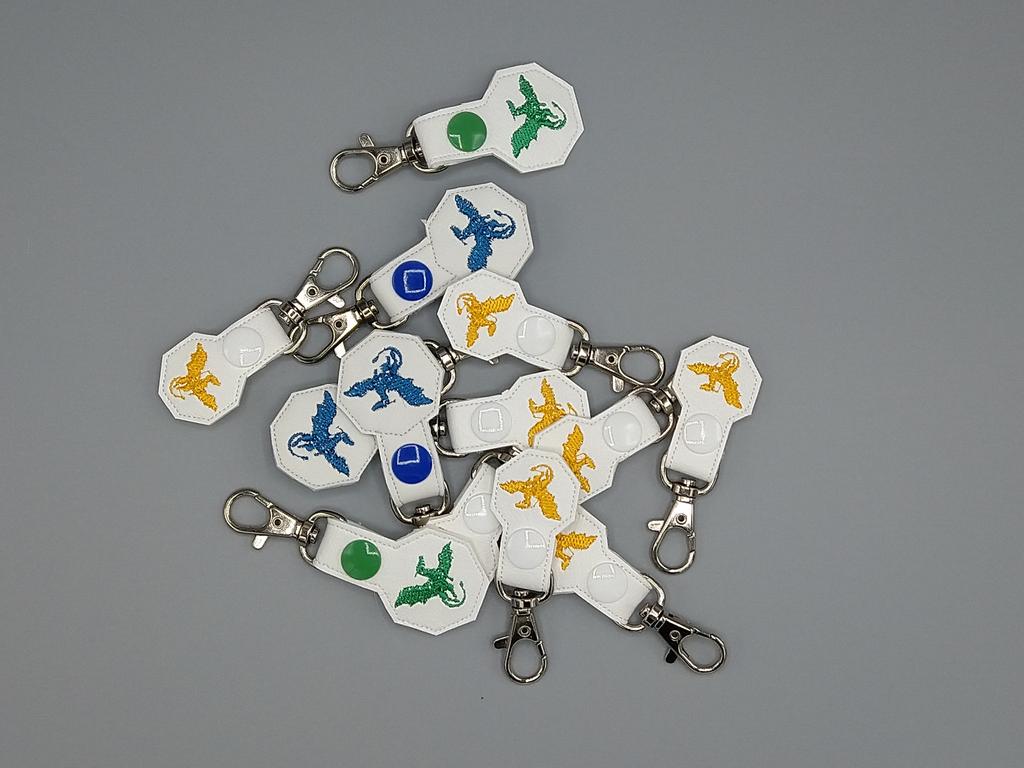 I’ve mentioned a lot of these things in various posts about my freebie designs, but it’s time to put them all in one place. Bunch of Amazon affiliate links, but I’ll talk about other places I get things.

I’m kind of targeting the would-be small Etsy seller because, well, that’s what I am. You might not be as concerned with efficiency if you’re just planning to make stuff for family and friends, but on the other hand I wasn’t planning to use the machine for so many vinyl products and, well, here I am. It’s addictive!

Plastex Marine Vinyl 📦 – Yes, JoAnn’s is more convenient (or was before the pandemic) and yes, I use it a lot, but it is usually squishier than Plastex. It doesn’t cut quite as cleanly, and stitch coverage is a little spottier.

If you’re ordering it (or any fabric) from Amazon, watch your seller. The default will often be a two-yard minimum, but switching to Fabric.com will be only one. I don’t completely understand this, since Amazon owns Fabric.com, but that’s usually how it is. Of course, if you’re going to buy more than $40 worth, you can go to Fabric.com directly and get free shipping. Also note that it’ll come on a roll over five feet long, so be prepared for that if you normally rely on deliveries being in a lock box of some sort.

Tear-away stabilizer (5×7 size), and black stabilizer 📦 – You float vinyl rather than hooping it directly, so stabilizer is important. It doesn’t need to be tearaway for snap tabs, but it’s the only kind I keep around because I guarantee I’d pick up the cut-away kind by mistake for something critical. You also don’t necessarily need black for black tabs (your backing is usually white anyway) but it’s nice to have around.

Full disclosure: I haven’t used the World Weidner in awhile; Designs by Little Bee used to sell rolls and I’m still working through my last one. She’s stopped though, and I’m thinking I’ll try the rolls my local quilt shop carries. It’s important to support local places where I can.

Water-soluble stabilizer 📦 – Lightweight water-soluble goes on top of your vinyl. It isn’t always necessary on a nice stable vinyl, but it’s nice to have around if you’re dealing with coverage issues. It’s humidity-sensitive, so I keep mine in a Ziploc – it’ll start to get brittle if I leave it out.

Embroidery thread, and metallic thread 📦 – I started with this set of no-name basics (in Brother colors) and have slowly been adding Sulky as I run low or need additional colors. They say you should stick with just one brand for consistency, and I’ll admit that makes the palette picking easier (though Ink/Stitch allows custom palettes and I’m working on one that reflects my exact thread collection).

Metallic threads are touchy beasts, and I don’t really recommend them for anything that’ll get significant wear, but I gotta admit they can really add zing. Use a metallic-thread needle, slow your machine all the way down, and be aware that that set weirdly doesn’t include silver.

White bobbins, black bobbins, and multicolored bobbins 📦 – You can get a 144-count bobbin box that’s half black and half white and at first I regretted getting so many but they go faster than you’d think. For the most part you don’t have to match bobbin thread, except for the final-assembly stitching, so you can get by with just white to start out. And for that final assembly, you can use regular sewing thread so if you’ve got a conventional machine that takes the same bobbins you’re golden. (No two of my machines, including the two Vikings, take the same bobbin. Ugh.)

Needles 📦 – Embroidery machines, at least home ones, take regular sewing-machine needles. Almost all the time you’ll want an embroidery needle, which is a sharp with a slightly larger eye. And you can go through them fairly quickly – an embroidery machine does a lot of stitches compared to a conventional.

An embroidery machine 📦 – Get a 5×7 (or larger). Even if you only plan to make tiny snap tabs, trust me on this. If you’re doing multiple colors on a single-color machine, it quickly becomes more efficient to gang your tabs. You can get some extra space on a 4×4 hoop by stitching some designs on the diagonal, but sometimes you’re just going to need the extra space for larger designs, like lip balm holders.

Additional hoops 📦 – This set comes with a second 5×7 hoop and at first I thought that was unnecessary, and now I run two copies of every design with a high color count because, again, changing thread colors is tedious. It also lets me clip jump threads on one hoop while the other is running, so the machine isn’t idling much. I wouldn’t mind having a second 4×4, to be honest. On the other hand I’ve never used the tiny hoop, and the 5×12 is impractical for most conventional designs (though it’s great for dragon wings).

KAMsnaps kit – You can’t make snap tabs without snaps. You can get a snap setter at JoAnn, and you can get a KAMsnaps kit on Amazon, but I’d recommend going straight to KAMsnaps.com, at least for the snaps themselves. If you get the hand press, you’ll want the extra-long snaps for thick material like vinyl. I started with the hand press and now have the most inexpensive interchangeable-die one. It’s technically a tabletop one but uses the same mechanism as the hand press – the fancier tabletop one apparently does fine with regular-length snaps in vinyl. The snaps are very pointy and can go through vinyl on their own, but I promise it’s easier on your fingers to get a tailor’s awl to pre-punch.

Swivel hooks 📦 – This is the most common hardware I use. I’ve bought at least three different brands of these, because they keep going out of stock. They’ve all been about the same quality; the important thing is to get a 3/4″ loop. I got a set of 1/2″ once and they work but I really need to put the snap on after threading the tab through, which is fine if you don’t ever want to switch to a split ring or whatever but at that point you might as well rivet.

Carabiners 📦 – I have mixed feelings about these. They’re dirt cheap, which is what I wanted since I made them to give away. They’re fun colors. But they’re also very narrow on the end that gets the tab, so I ended up making a little pinch in the tabs to keep from having to [try to] pleat the vinyl to get it to fit. If you’re not using my water bottle carrier design, you’ll either need to edit the design you use, or find a different carabiner.

Water bottle carrier O-rings 📦 – These are very snug, and happen to come in a 100-pack like the carabiners. Any 7/8″ inside diameter O-ring should work. There’s a graphic going around that says DANCO 80973 (1.23″ ID) works on larger bottles like Powerades and Snapples but I haven’t tried those out yet.

Ball chain keychains 📦 – If you have a 4×4″ embroidery machine, sometimes you want to use an eyelet design instead of a snap tab. These go through the eyelet to substitute for the swivel hook. My package had a few that were missing the connector, but I’ll admit I didn’t count the chains – often a seller will overpackage a little to allow for some defective ones.

Eyelets – I had a huge stash of these so I don’t have any specific recommendations; read reviews because colored eyelets that flake when you install them are awful. Investing in a nice punch makes a huge difference – I have one very sharp punch and one very dull one and I cry when I can only find the second one. And I don’t even know where the nice one came from so I can’t recommend one.

Split rings – I had a huge stash of these too so I haven’t bought any from Amazon; I’ll just point out that they come in a round(ish) cross-section (what I have) and a flat version. The latter looks classier, but costs more, and based on the review for that link, don’t buy that particular kind, and always test your hardware before you give it to someone or sell it. Split rings that stay sprung are the worst.

Scissors – In addition to all the stuff I talked about in my impromptu scissors roundup, I have added a new pair: this funny-looking critter. They’re great for nipping short cuts in vinyl, though for curves or longer runs I still use something with a longer blade. And of course you’ll want a rotary cutter or three, and maybe some cut-resistant gloves to go with that. “Fun” tip: don’t use the eyelet punch on your rotary mat or you’ll end up with little circles that don’t heal.

Whewwww… I’m sure I’ve left things out, and of course you don’t need everything on this list to get started, but hopefully that sets you on the right road.